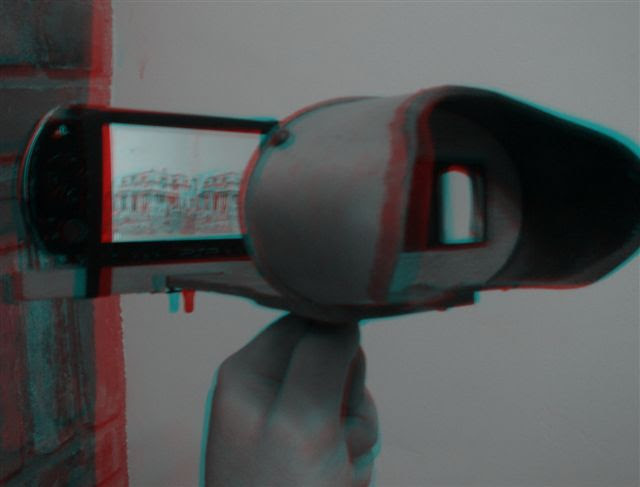 Last year, while touring the Heritage Square museum in Los Angeles, I learned that the stereoscope was the TV of the Victorian era. In the 1890s, it was common for people to retire to the parlor after dinner and pull out the stereocards in order to watch an African safari or a trip to Moscow.

I have a large collection of devices for viewing 3-D images and videos, both high-tech and low-tech, but until recently, I didn't have a vintage "Holmes-style" stereoscope card viewer. That changed in 2006 when I purchased a nice century-old viewer at the annual Stereo Club of Southern California auction. Only problem now is that stereocards are large and bulky, and lugging around a collection of images requires a large box. I figured that there had to be a digital solution.

I had already been playing around with transferring 3-D movies to my Sony PSP in side-by-side format for freeviewing, and had picked up the "Metal Gear Acid" game that comes with a cardboard 3-D attachment for the PSP, so it seemed that the PSP would be the answer. After all, the PSP has a nice wide screen with pretty good resolution, and can hold hundreds of JPEGs on it's internal memory stick. It even has a built-in slideshow function. And also, I thought it would be cool, and somewhat "steampunk" to mount a PSP on a vintage stereoscope.

As luck would have it, the PSP fits almost perfectly between the two wire card-holders on either end of the slidebar. Now, I didn't want to do anything to alter the viewer, as it is an antique, and I wanted the PSP to be removable, so i turned to my old friend Velcro to attach the PSP. I cut two loops of thin Velcro strapping, just long enough to go around the PSP, and slidebar, and fasten to itself. That's really all it takes to hold the PSP firmly in place. 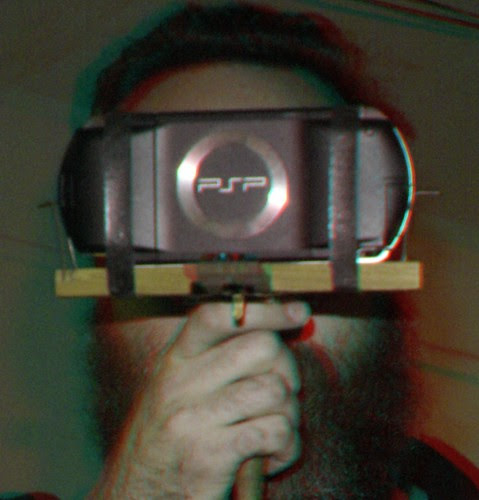 The whole setup works perfectly. I'm currently carrying around some 400 jpegs of stereocards and a bunch of 3-D movies on a 2G memory stick. Converting movies to parallel side-by-side format for the PSP is pretty easy, and gives me a portable method to show my work to people. And I've discovered that the PSPscope is a great way to view digital stereo photos shot with my Loreo Lens-in-a-cap attachment, as I can just eject the memstick from my DSLR and insert it into the PSP. I'll write up some tutorials on this stuff in the future.

So now I can carry my whole stereocard collection around at once, instantly access any image, watch a slideshow, 3-D movie, or play a 3-D videogame on this marriage of 19th century and 21st century tech.
Posted by Eric Kurland at 6:16 PM No comments:


One hour of stereoscopic 3-D footage from the 2007 Bay Area MakerFaire, compressed into two minutes.

I had a stereoscopic camera rig at my booth, running live 3D projection onto a silver screen. Watch as people reach out to touch themselves.

Grab your Red-Cyan Anaglyph glasses and enjoy!
Posted by Eric Kurland at 3:31 AM No comments:

I have two eyes!

Welcome to the blog! I'll be posting all kinds of cool 3D things made possible through binocular vision...and despite the blog's title, I'll try not to hurt your eyes.
Posted by Eric Kurland at 1:24 PM 1 comment: