Posted by Eric Kurland at 12:52 PM No comments:

This Time It's Personal 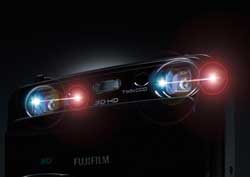 In July, I attended the National Stereoscopic Association annual convention, held this year in Loveland, Colorado. It was great to see so many familiar faces there, meet so many new people, and to get to see so many fantastic stereoscopic presentations. One thing that was very interesting to observe at this year's convention was that SO many attendees were using Fujifilm Finepix Real 3D W3 cameras. At one point we were asked how many people in the room had W3s, and I lost count of how many hands shot up, W3s held tightly in their palms. They appear to have become the 3-D camera of choice for many, and Fujifilm has been very supportive of the 3-D community. In fact, Fujifilm recently donated several of these cameras to the LA 3-D Club for our members to use at club events and outings. I have also recently noticed while attending industry trade shows, and even on production sets, that a lot of Hollywood 3-D professionals are also carrying Fujifilm W3s as their personal 3-D cameras. Many users site the convenient size, ability to shoot high quality 3-D stills, HD video, and the glasses-free 3-D screen as reasons to keep one handy. I know that I've found that in addition to being a very good camera, it makes a great playback device as well - I have my own films loaded onto my W3's memory card so that I can show people my work at a moment's notice on the autostereoscopic display.  Where just a few years ago there were no commercially available 3-D digital cameras, the Fujifilm W3 has definitely filled a niche market.

And now thanks to a flurry of new consumer devices, personal 3-D is going mainstream. This past March, Nintendo released its 3DS handheld game system, with a glasses-free screen, built in stereo camera (albeit low-res), and ability to play 3-D videos, as well as some incredibly cool augmented reality games that merge computer graphics with live stereo imagery. Last month HTC launched their EVO 3D phone on Sprint, also with an autostereoscopic screen, and built in HD 3-D camera, and this month AT&T enters the fray with the LG Thrill 4G, with similar specs, and the ability to upload and stream directly from Youtube's 3-D channel. Sony, JVC, and Panasonic all have consumer level stereoscopic camcorders on the market now. There have also been announcements of 3-D tablets hitting the shelves, 3-D portable media players and digital photo frames, and toymaker Hasbro has even come out with the My3D - an optical attachment that turns iPhones and iPods into digital stereo viewers.

And with personal portable 3-D viewers comes the need for 3-D content. Much will come from the Hollywood studios, and much will be user-generated via the cameras in these devices, and a great deal of truly innovative work will come from independent 3-D content creators. Two 3-D music videos that I shot for the band OK Go have already been licensed and distributed by Nintendo on their 3DS, and both the consumer electronics companies and the telcos are eager to launch their own 3-D streaming media channels. It excites me to see so many new possibilities for getting 3-D content into the hands of the masses, and so many opportunities for both experienced and aspiring 3-D photographers and filmmakers to create and share their work.
Posted by Eric Kurland at 5:29 PM No comments:

Back in January, 2011, Tim and Dan from OK Go performed a scene from Star Wars for a vaudeville-style comedy show in Hollywood. They played Darth Vader and Princess Leia live on stage, and all of the other characters were rear-projected in 3-D. Glasses were provided to the audience, and there was much laughter.

Now, here for your viewing enjoyment, we re-create the experience.

Posted by Eric Kurland at 2:05 PM No comments:

KCET posted some great coverage of a 3-D panel that I participated on.

Read it here: http://www.kcet.org/updaily/socal_focus/arts-culture/the-future-of-3d-35027.html
Posted by Eric Kurland at 3:13 PM No comments: