At The Pina Oscar Party 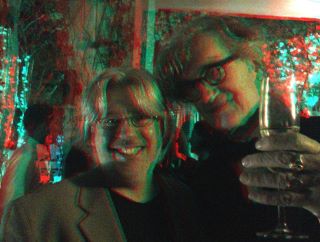 Posted by Eric Kurland at 2:40 PM No comments:

Saving a piece of 3-D History

3-D filmmaker, engineer, author and historian Dan Symmes passed away last September, leaving behind a life's legacy of 3-D work in film, video and print. A 3-D fan himself since childhood, Dan had amassed a huge collection of 3-D technology, historical artifacts and memorabilia over the years, most of which was put up for sale at his home last weekend.
Despite the desire of many who knew Dan to keep his amazing collection of 3-D historical artifacts together, his estate was to be sold off piece by piece. I feared that many of Dan's one-of-a-kind items, particularly his master videotapes and film rarities, would never be seen again, and perhaps even be recycled or destroyed. After a discussion with the LA 3-D Club board, I took on the cause of preserving of as much of Dan's historical items as was prudent and feasable, in the hope that some items could become part of our club library, some could find new homes within the 3-D community, and some could be donated to proper preservation organizations (UCLA, The Paley Center, The Academy, etc.).
The sale began at 7am, Saturday, and I was there for the entire day, joined at various times by board members Ray Zone, David Starkman, and Lawrence Kaufman, and also by a number of club members. In an effort to preserve Dan's rare 3-D content, I spoke at length with the estate sale organizers about the historical value contained in the many video tapes in the house, and they introduced me to a potential benefactor who was excited to become our "angel investor" and put forth the funds to rescue ALL of Dan's rare master recordings at no cost to the club. We loaded Ray's truck to overflowing, and that wasn't even half of the materials.
Ray and I returned to the sale on Sunday, joined through the day by board members Susan Pinsky and David Starkman. Thanks to our generous benefactor we were able to save not only Dan's entire collection of video tapes, including all of the Master recordings from the 3DTV Corp., but also his video decks for playing back many of the tapes, and much of his notes on 3-D history, cameras, movies, etc. We were also able to obtain a pair of motors for interlocking 35mm projectors, and will soon begin talks to discuss installing them in a local theater. Hopefully this will allow us to screen many of the 1950s 3-D features which were shown at the 3-D Expos in 2003 and 2006, and many of which currently reside in the UCLA film archive. I want to especially thank club members Andy Parke, Chris Olsen, and Brian Gardner for their assistance in moving much of the items into the truck.
And on Thursday, Ray Zone and I returned to the house one last time, along with club members Jim Carbonetti and Roger Maddy, to rescue the only known surviving Natural Vision camera rig, which was used to shoot "House of Wax", "Charge at Feather River" and a number of other 1950s Golden Era 3-D features.
Over the next few months, we will be taking inventory of the significant items and cataloging the massive video archive so that these programs can eventually be digitally duplicated, and finally be seen again. Ultimately, we hope to form relationships with other archivist organizations, and donate these rare items and videos for inclusion in museums and libraries so that they will be available for future generations.
Posted by Eric Kurland at 1:00 PM No comments: