Last night I attended the Culver City screening of the 3-D music video for Björk's Wanderlust.

It was BRILLIANT! Filmmakers Sean Hellfritsch, Isaiah Saxon and Mark De Pace were present and hosted a Q&A session featuring behind-the-scenes 3-D photos taken by stereographer Greg Dinkins. All I can say is - if you have an opportunity to see this short film projected on a large screen, GO! It will be released eventually online and on DVD in anaglyph, but the full color, large screen version is not to be missed. For more on the filmmakers, visit their website Encyclopedia Pictura and for more info on the making of the video, click here.

The video is viewable online at wired.com!
Posted by Eric Kurland at 4:17 PM No comments:

Last week, I found an auction on Ebay that I just had to bid on. It's a vintage stereocard of a group of British children holding up an effigy of Guy Fawkes. Yes, Guy Fawkes - England's 17th century terrorist who attempted to blow up the Houses of Parliament, was caught and executed, and went on to inspire the titular character in the graphic novel and movie "V For Vendetta". 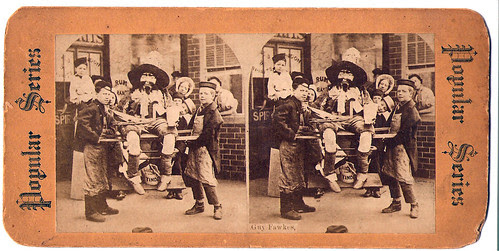 “Remember, remember
the fifth of November,
The gunpowder, treason and plot,
I know of no reason
Why gunpowder treason
Should ever be forgot.”

November 5th, the anniversary of the Gunpowder Plot, marked the traditional British celebration of "Guy Fawkes Night". The evening typically included festive bonfires, fireworks, and children going door-to-door with an effigy of Fawkes.

I thought the card was really cool, and now I own it. Here it is in anaglyph for your viewing pleasure. 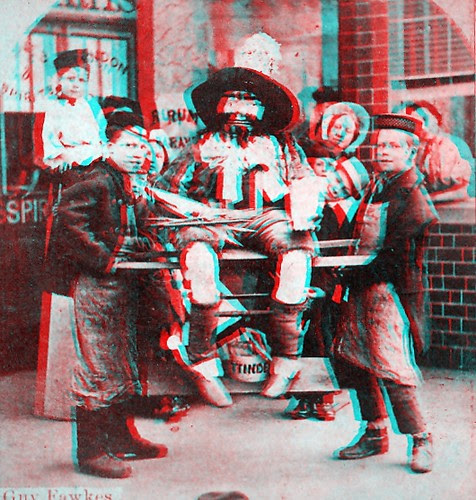 Posted by Eric Kurland at 4:13 PM No comments:

The sound from the rockets was unbearably loud, but the crowd didn't seem to mind because - hey, Boba Fett with a jetpack!

red on the left/cyan on the right...enjoy.
Posted by Eric Kurland at 12:37 PM No comments: