The LA3DClub has teamed up with the Downtown Independent Theater to present screenings of independent 3-D movies in Los Angeles.

Our next scheduled show of independent 3-D will be Tuesday, March 30th, at 8:30pm. We will present an illustrated 3D lecture by Ray Zone along with two nWave Pictures films about the history of 3D titled “Encounter in the Third Dimension” and “Misadventures in 3D.

Zone’s lecture addresses the 3D filming of the historic Lumiere brother’s ‘actuality’ titled “L’Arrivee du Train” and both the 2D (1895) and 3D version (1935) will be screened. As one of cinema’s founding myths, the screening of the Lumiere film in 1895 at the Café Grand in Paris evoked panic in the audience. Zone reveals some hitherto unknown historic facts that shed new light on this founding myth of cinema and he also explains the 3D camera system the Lumiere’s constructed to make this seminal work of cinema.

“Encounter in the Third Dimension” (1998)and “Misadventures in 3D” (2003) feature Stuart Pankin in groundbreaking stereoscopic visuals addressing the history of 3D and how stereoscopic perception works. Elvira-Mistress of the Dark is also featured in “Encounter in the Third Dimension.” Both films have presented in IMAX Theaters worldwide to great acclaim since their original release dates.

Come check out LA's only Indie-Friendly 3-D cinema. We hope to see you there!

Admission to the event is:
$5 for current LA3DClub members
$10 for non-members (admission is waived with USC Student ID)

Note: Paid parking is available at many parking lots in the adjacent area. The theater is also only several blocks from the MTA Red Line.

http://www.LA3-DClub.com
http://www.DowntownIndependent.com
Posted by Eric Kurland at 8:02 PM No comments:

For the last week, I have been attending the SXSW Film and Interactive Conference in Austin, Texas. Yesterday, I moderated a panel on 3-DIY, with fellow stereographic filmmakers Noel Paul, Gray Miller, and Ryan Suits. The panel went very well, and included some great information for indie filmmakers looking to get started in 3-D. My presentation included this version of my 3-DIY powerpoint:

I'll have more links, info, audio and video from the panel soon. In the meantime click through to enjoy this 3-D video clip from Saturday's panel on "Viral Video"

Posted by Eric Kurland at 2:54 PM No comments: 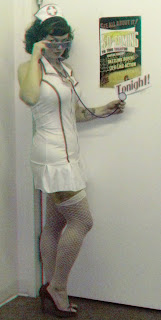 The LA3DClub (of which I am Vice President) has entered into a partnership with the Downtown Independent Theater to provide a venue for independent 3-D movies to screen in Los Angeles. Thanks to Perry Hoberman at USC, who arranged for the donation of a theatrical silver screen, we now have a permanently installed screen in the theater. The club also recently acquired two ProjectionDesign F3 large venue projectors, which provide dual-digital polarized projection from the Downtown Indie's projection booth and project a sharp, bright, keystone-free image over 22 feet wide.

This has been my pet project for a while. Last July, when I shot my short 3-D project, Elevation, my co-producer, Roger Mayer, mentioned that he was programming the Downtown Film Festival of Los Angeles, and that it was "too bad we couldn't show 3-D at the fest." I assured him that the LA 3-D Club could show 3-D, and we put together a 2-hour program of independent 3-D shorts. Roger booked us into the Downtown Independent Theater, where we brought in a 12-foot silver screen, and a pair of projectors for the night. The show went great, and the theater invited us back to do a Halloween 3-D show. I mentioned to Jim Kirst, the Artistic Director of the Downtown Indie, that it would be great to eventually have a permanent silver screen, and projectors in their booth - but we figured the expense made that impossible. Lo and behold, I got a call a week later from Perry Hoberman, a friend and professor at USC. Apparently USC had a 40' silver screen that was being stored behind a set on a soundstage. The screen had been inaccessible, but the set had just been torn down, and for about a week, he had access to the screen. His question - "If we donate this to the club, could you find a use for it?" YES! We loaded up a truck and moved the screen to the theater. Shortly after that, the club was offerred a pair of large venue projectors, sans lenses, at a fraction of their original cost. We dipped into the club treasury, and made the purchase. On a whim, I checked Ebay for the VERY expensive long-throw lenses we would need to project from the theater's booth, and amazingly there was one available in New York - I "buyed it now." On Ebay, exactly one week later, a matching lens showed up in Kansas City, and I got that, too. Oddly, there hasn't been another matching lens on Ebay since, and apparently there hadn't been one for months before, either. Serendipity. On December 12th, 2009, the white screen came down, the silver screen went up, the lenses were married to their projectors in the booth, and the Downtown Independent Theater became the only place in Los Angeles to see regular screenings of independent 3-D content.

The LA3D Movie Division is offering monthly 3-D screenings to the public through this new venue. In January, we held an "open screen" night, inviting independent stereoscopic filmmakers to bring their work to the theater and have it shown on the big screen. That was followed in February by a screening of the indie horror feature SCAR 3-D, and featured a Q&A with Director Jed Weintrob and Producer Norman Twain. 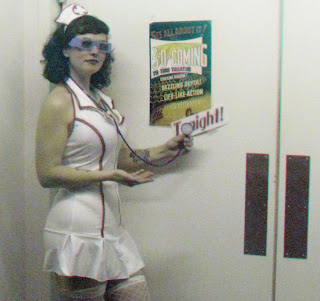 We also did a "William Castle" style promotion for SCAR, and had a (sexy) nurse standing by in the lobby with smelling salts during the screening to come to the aid of any unfortunates who were unable to handle the graphic subject matter. The next screening will be on March 30th, 2010. The program will be announced soon.

Come check out LA's only Indie-Friendly 3-D cinema. We hope to see you there!
Posted by Eric Kurland at 12:23 PM No comments: