One For The History Books 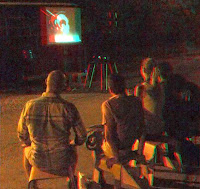 On Friday, August 26th, the LA 3-D Club teamed up with the Echo Park Film Center to present a special 3-D screening of the 1953 movie Robot Monster. The EPFC is a media arts cooperative dedicated to providing equal and affordable access to film/video education and resources. Throughout the year they offer free filmmaking classes for teens and seniors, and affordable workshops for adults, on many subjects including narrative and documentary filmmaking, digital editing, and 8mm and 16mm film (in March I taught a class there on 16mm Bolex 3-D). They have a film and video lending library, and camera and projection equipment available for rental. They hold regular screenings of all kinds of independent films, and they own a veggie-powered school bus known as the Filmmobile, an eco-friendly cinema and film school on wheels. During the summer months, the Filmmobile presents showings of classic movies at the locations around LA where they were shot, and our joint screening of Robot Monster was held in the Hollywood hills at the gates to the famous Bronson Cave, used in the film as Ro-man’s headquarters. Everyone in attendance had a good laugh at director Phil Tucker’s seriously bad dialogue, and it was great to see this 50’s 3-D stinker with an appreciative audience. I even put in a special appearance as Ro-Man

In order to show this movie, I had to reformat an old field-sequential dvd recording of a 1990’s era 3-D broadcast, as Robot Monster isn’t available on Blu-ray, and it got me thinking about the fact that most of the stereoscopic movies from the 1950s are not currently available in any 3-D format. In fact, aside from the two 3-D Expos held in 2003 and 2006 at LA’s Egyptian Theater, most people who weren’t around in the 50’s have never had an opportunity to properly watch these pictures from 3-D’s “Golden Age”. I would think, and hope, that with the advent of D-cinema and 3DTV the studios would look at their back libraries and re-release this content. It would seem like a no-brainer to take such classic films as House of Wax, The Creature From The Black Lagoon, Kiss Me Kate, and Dial M For Murder, and re-release them to a new generation. Unfortunately, the studios have not yet made these films available, nor have they announced any intentions to do so.
It really is a shame. Hollywood is trying very hard to produce good 3-D motion pictures, and everyone seems to be starting from scratch, trying to reinvent the wheel, and mostly disregarding the 3-D of the past as too primitive to be of any value. But I think there is a lot that could be learned from studying these films, and the methods used in their production. Yes, 60 years ago the camera rigs were big and cumbersome, their wide interaxials made it difficult to shoot close-ups, and the language of 3-D cinema was only in it’s infancy. Still, many of the films of that era demonstrate a brilliant use of the medium, their makers finding ingenious ways to work within the limitations of the technology to make beautiful images and tell amazing stories. I wish that it were mandatory that every filmmaker embarking on a 3-D project watch the 1953 movie Inferno, starring Robert Ryan and Rhonda Fleming, directed by Roy Ward Baker. This film demonstrates what well executed 3-D can bring to a serious drama - gorgeous stereoscopic expanses of desert, claustrophobic moments punctuated by a character’s inner monologue, and the great action of a climactic struggle during a raging fire. Today’s filmmakers need to be able to study and reference this and all of the other other classic 3-D films in order to see what worked, and what didn’t, and learn from those earlier efforts for 3-D cinema to have a viable future. After all, as philosopher George Santayana wrote in 1906, “when experience is not retained...infancy is perpetual. Those who cannot remember the past are condemned to repeat it.”
Posted by Eric Kurland at 6:12 PM No comments: