Just got back to LA from the 2010 Consumer Electronics Show in Las Vegas, and the buzz this year was definitely 3-D. I've attended the CES for about ten years now, and every year there is usually some company showing a 3-D monitor, or claiming to have invented a new head-mounted display, but this year, there was 3-D at almost every major manufacturer's booth. Sony, JVC, Panasonic, Toshiba, Samsung, Mitsubishi, Sharp, LG, practically every TV maker had their version of 3DTV. Some use active shutterglasses, some use circular polarized, some are embracing multiple technologies, and all are pushing it heavily. Projector manufacturers are releasing 3-D ready projectors for home theater, classroom, and business use. Players from the theatrical end of 3-D were present, as RealD and XpanD are both moving into the consumer glasses market.

In fact only one industry seemed to fall flat off the 3-D bandwagon - the camera companies. 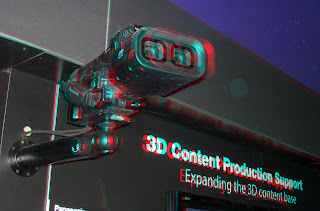 Panasonic was the only major player to show a 3-D video camera, and they are pricing it at $21,000! Fuji, of course, has their 1st gen 3-D still camera, but nobody else is joining that game - Canon's comment is "we're still investigating consumer needs." Even Sony, with their massive 3-D pavilion and live 3-D broadcasts in partnership with 3ality, had no answer regarding a consumer 3-D camera.

3-D Bluray was all over the place, despite my strong belief that optical media is a dead-in-the-water format due to VOD and digital downloads. (A friend of mine calls 3-D the "defibrillator of Bluray") And DVD is dead - not a single 3-D DVD solution to be found anywhere. In fact, almost no support for existing home 3-D solutions. This all fuels my fear of a consumer backlash against 3-D at being told by the big corporations that they need to buy completely new hardware, both HDTVs and players to enjoy the coming 3-D age, especially after being forced to buy new HDTVs or digital tuners only a year ago.

The hope is that 3-D broadcasting will drive the market, and DirecTV has already announced both a Discovery 3-D Channel and ESPN 3-D. ESPN will launch their channel with worldwide 3-D coverage of the FIFA Soccer World Cup Championships in June - the largest single undertaking of live 3-D in history. The problem is that there will be a shortage of content in the immediate future to keep these 3-D channels "live". Hopefully, indie content producers like myself will be able to fill some of that void.

Which leads me to my observation that the Big Boys are missing a very important point. I attended a number of panels, and the "3D@Home Consortium" breakfast, where industry experts spoke of the future of home 3-D, both with rosy glasses (pun intended) and with a complete ignorance of the fact that independent content exists. Apparently, in the corporate vision of the future, only the major studios have the ability to produce viable 3-D movies and television programs, and they are missing the boat here. I stood up at the consortium breakfast, and asked why nobody was addressing what I see as the three 800-pound Gorillas in the room:

- first, that consumers will not be as eager to buy into a new technology if they can't create their own 3-D movies to view on that technology,

- Second, that there needs to be a distribution pathway for independent stereographic 3-D content to enter the game,

- and third, Youtube already delivers 3-D to the home via the beta player that has been active since last summer. Eventually, that player will finish it's beta stage, and any website will become a 3-D delivery platform via a simple embed. Most of the 3-D TVs on the show floor included direct Youtube streaming via WiFi as well. Now, Google owns Youtube, and Google has an OS that will be on millions of cellphones this year, also Youtube enabled. So, follow me here, Google is poised to become the LARGEST SINGLE AGGREGATOR AND DISTRIBUTOR of 3-D content in the world - both studio, indie and consumer produced content - and no one is talking about it.

I asked why Google was not invited to the table.

I left the consortium speechless.
Posted by Eric Kurland at 10:55 AM 2 comments: