Several months ago I wrote about the secret 3-D video that I shot for the band OK Go. Well there is some exciting news to report. In February, I received an email from the band's management, asking if I could format the 3-D video files to some specifications provided by videogame maker Nintendo. I prepared the files as requested and sent them off, curious as to what Nintendo was going to do with them. I soon found out that Nintendo had signed a deal with OK Go to include the video with the launch of the new autostereoscopic 3-D hand-held game system, the 3DS.

In mid-March, the band and I were invited to a private pre-release demonstration of the 3DS in Hollywood. I arrived at the demo location and met the Nintendo representative, who introduced to me the 3DS handheld electronic game and its human bodyguard (seriously, it had a bodyguard. My plan to "grab and run" was thwarted!). The 3DS itself is a small handheld game system that opens like a clamshell to reveal two screens. The lower screen is a touchscreen for controlling the device, and the upper screen is a 4-inch diagonal autostereoscopic screen for displaying 3-D games and content to a single user. According to reports, the screen uses a parallax barrier technology developed by Sharp Electronics to deliver a 400x240 left and right image to each respective eye. I was handed the 3DS, and found the screen's "sweet spot", centered about 18 inches away from my face. The Nintendo people wanted to show me some games first. They activated the 3DS' stereo cameras - yes that's right, the 3DS has a pair of cameras built into it for shooting 3-D. At only 640x480 pixels it's no replacement for a Fujifilm W3, and right now you can shoot stills with this, but not video. Once activated I could see the live view in stereo on the 3DS screen. They placed a card on the table and asked me to point the game at the card. The 3DS prompted me to position myself to where it could read a tracking mark printed on the card, and once it locked in the game began creating a world of augmented reality on my screen. I played a game where I shot at a dragon that was virtually coming out of a hole in the tabletop. My goal was to find the dragons weak spot by circling around the tabletop. This was very cool. In another game demo, the 3DS wrapped a photo of my face onto "beachballs" that attacked me head-on in the 3-D room-space onscreen. This was a new gaming experience for me, and the 3-D really enhanced it. A "depth slider" to the side of the screen allowed me to dial in the amount of depth displayed by the CG elements on the screen, and I could turn it off completely if I desired. I was given several other demos of the screen's rendering capabilities, and was so far impressed. 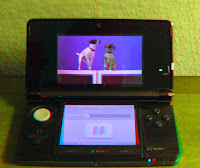 But, of course, what I really wanted to see was the video. A tap on the touchscreen to launch, and White Knuckles 3-D began playing in all of it's "dogs and buckets" glory. The image on the glasses-free screen looked bright, and the depth worked perfectly. I was very happy. I watched it again - there was something rather addictive about holding a 3-D video player in your hands and watching it without glasses. I gave the Nintendo rep my approval. By this time Dan Konopka, OK Go's drummer, had also arrived at the demo, and was also enjoying the video. Special props to Dan for what happened next - he told the Nintendo people that they needed to include credits at the end of the video to recognized the people who made it, and they agreed to add that for the release. the demonstration was over, and the 3DS was sealed into it's protective briefcase, and handcuffed to the bodyguard, who was racing off to the airport to fly it to another demo (okay, there weren't really handcuffs, but it was locked into a briefcase).

Fast forward nearly two weeks, and Nintendo put out a press release announcing that when the 3DS is released on March 27th, the OK Go video will be part of the first system update.  It was confirmed, so now I needed to own a 3DS. I found myself standing in line at the Best Buy in West Hollywood, at midnight on a Saturday night, to be one of the first to get my hands on one I got the device home, charged the battery, and powered it up. The screen looked just as I remembered from the demo - so far so good. A simple wifi connection to the internet, and I was downloading the system firmware update that would add White Knuckles to the menu. Several minutes later, and there it was.

For those of you who don't have a 3DS, here is what the experience is like as shot with my stereo camera rig:


Nintendo states that the video is only available for a limited time, and will be deleted when they release a future system update. I'm going to permanently turn off the wifi, so I'll always have it saved, and ready to watch at a moments' notice.

The 3-D music video that I shot for OK Go will be the first music video available for the new Nintendo 3DS when it launches this coming Sunday, March 27th.  The video was shot in true 3-DIY style (see my previous post), and will be viewed by millions of people this weekend! 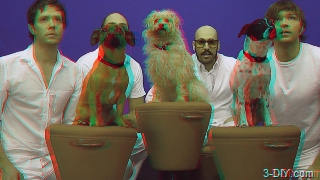 The new nintendogs™ + cats game won't contain the only furry animals running around the Nintendo 3DS™ system when it launches on March 27. Users who perform a system update will get access to a 3D version of the "White Knuckles" music video by OK Go. The single-take video, which features a bevy of adorable rescue dogs (and one goat), has been viewed more than 9.3 million times on YouTube. OK Go is known for its creative, one-of-a-kind videos, and the glasses-free 3D technology of Nintendo 3DS creates an entirely new experience by introducing a new dimension to the dogs and band members.

"We shot the 'White Knuckles' video in 2D and 3D at the same time, but until now, there hasn't been much opportunity for people to see the 3D version," said Trish Sie, the video's Grammy-winning director. "I'm fired up for people to watch the video again with Nintendo 3DS and experience it in a whole new way. This opens up all kinds of creative opportunities."

The recommended system update, which is now available, also enhances the communication features of the Nintendo 3DS system. To perform the update, users simply start the "System Settings" from the Home Menu, select "Other Settings" and scroll the page right to select "System Update."

Nintendo 3DS launches in the United States on March 27 at a suggested retail price of $249.99. For more information about Nintendo 3DS, visit http://www.nintendo3ds.com/. 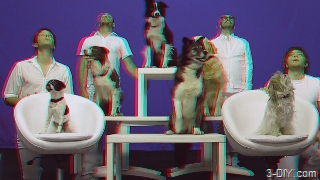 Posted by Eric Kurland at 1:58 PM No comments: