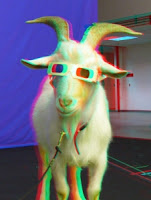 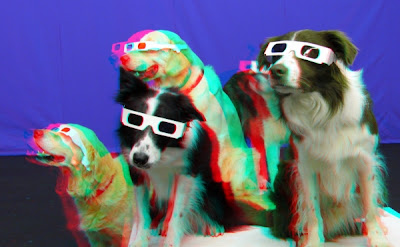 The goal was to get the entire routine in one take, with no edits – not an easy task when you consider that trained animals are usually only expected to do one “trick” on set before the camera cuts. But Lauren Henry, Roland Sonnenberg and their team of trainers from Talented Animals were convinced that they could pull off the unheard of task of getting the dogs to do the full routine in time to the music. Over the next five days, we shot 124 takes, and managed to get through the whole routine only about thirty times. Sometimes the dogs missed a cue, sometimes the band missed their marks, and for a while, the dogs were having so much fun that they started going faster than the music. In the end, we were all in pretty strong agreement that there was something very magical about take number 72, and that became the one we used for the final video. We wrapped production in Oregon on Monday, and I promised to keep the 3-D video a secret for the next few months.
Post production on the 3-D video was done back in Los Angeles in my Secret Underground Lair. I utilized the Stereo Movie Maker application to do alignment and parallax adjustments, and did color correction, titling, and final output from Adobe After Effects. The band decided that they wanted to show the 3-D video during their fall tour, so the mastering included the creation of both a side-by-side version for polarized projection, 3DTV, and internet viewing, and also a color-optimized red/cyan anaglyph version that could be projected on the road with a single LCD projector and white screen. The 2-D version was released on Youtube on September 20th, 2010, and in just one month, had already received over 7 million views. The 3-D version is currently being shown at OK Go's live shows around the country, and if internet reviews are any indication, it is being very well received.
I've always been a strong believer in making the most out of whatever resources are available to me, and finding ways to work within whatever limitations those resources impose. I'm thrilled to have had this opportunity to work with a band that so embodies the do-it-yourself ethos. And I think that the video itself proves that it's not so much what camera or rig you use that's important - it's what you do with it.


UPDATED - Read PART II of this post here
Posted by Eric Kurland at 5:51 PM No comments: